A Walk Every Day Can Keep Aging At Bay

It’s much easier to talk the talk about staying young than it is to walk the walk. Starting in our 20s and 30s, we commence a long, seemingly inevitable physical deterioration. Our maximum heart rate declines, and with it the amount of oxygen-bearing blood the heart can pump. Muscle is gradually replaced with fat and weight edges upward. And decade by decade, as oxygen intake drops, it becomes a little harder just to get around. Eventually, in our 70s, 80s, or 90s, most of us lose our “functional independence,” the ability to live on our own. We move to assisted-living or nursing homes because, literally, our living needs to be assisted. 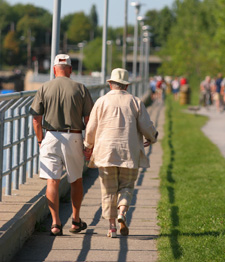 But what if there were a simple way to turn back the clock? In a recent article in the British Journal of Sports Medicine, Roy Shephard, a physician at the University of Toronto, reports that for people age 64 and older, a vigorous, hour--long walk five days a week cuts a dozen years from their biological age. In a review of other published work on the subject, Shephard found that such an exercise program could also extend a person’s functional independence, which tends to be lost when maximal oxygen intake falls below 18 milliliters per kilogram per minute in men and 15 ml/kg/min in women.

Without this kind of exercise program, about 10 years of physical aging normally corresponds with a loss of about five ml/kg/min. But Shephard found that beginning a program of vigorous aerobic exercise could restore about 25% of maximal oxygen intake within three months, raising that essential level by an average of six ml/kg/min and decreasing biological age by 12 years.

Shephard also found that regular exercise provides other benefits, helping prevent conditions that may hasten aging including obesity, high blood pressure, diabetes, heart disease, osteoporosis, and even some kinds of cancer. And the improved muscle tone that comes with brisk walking, swimming, or other aerobic activities may help older people avoid falls.


Another study, from Texas, further highlights what exercise can do. In 1966, five healthy 20-year-olds were kept in bed around the clock for three weeks—and suffered many of the ills normally associated with aging. They gained weight, their heart rates and blood pressure rose, and their hearts lost pumping capacity. Then, an eight-week exercise program more than reversed the effects of inactivity. In a follow-up with the men 30 years later, actual aging had imitated the effects of the forced bed rest. But here, too, an endurance exercise regimen undid most of the damage, restoring all of their lost aerobic capacity.


The moral? Exercise always helps, and it’s never too late to start pushing back the hands of time.

This article was written by a professional financial journalist for Preferred NY Financial Group,LLC and is not intended as legal or investment advice.

An individual retirement account (IRA) allows individuals to direct pretax incom, up to specific annual limits, toward retirements that can grow tax-deferred (no capital gains or dividend income is taxed). Individual taxpayers are allowed to contribute 100% of compensation up to a specified maximum dollar amount to their Tranditional IRA. Contributions to the Tranditional IRA may be tax-deductible depending on the taxpayer's income, tax-filling status and other factors. Taxed must be paid upon withdrawal of any deducted contributions plus earnings and on the earnings from your non-deducted contributions. Prior to age 59%, distributions may be taken for certain reasons without incurring a 10 percent penalty on earnings. None of the information in this document should be considered tax or legal advice. Please consult with your legal or tax advisor for more information concerning your individual situation.

Contributions to a Roth IRA are not tax deductible and these is no mandatory distribution age. All earnings and principal are tax free if rules and regulations are followed. Eligibility for a Roth account depends on income. Principal contributions can be withdrawn any time without penalty (subject to some minimal conditions).

Not found any published videos!